Exclusion Zones around the world

When someone mentions the phrase Exclusion Zone, the first thing that comes to mind is Chernobyl. But in addition to the famous Chernobyl Exclusion Zone, there are numerous such restricted areas that exist in the world today. They also have radiation exposure to abnormally high levels and their own interesting story.

What does Exclusion Zone mean?

According to Collins Dictionary:

An exclusion zone is an area where people are not allowed to go or where they are not allowed to do a particular thing, for example because it would be dangerous.
But in our case we are interested in Nuclear Exclusion Zones and based on this information we can define it as: The areas around the site’s nuclear disasters, which have been closed off, because of the ongoing dangers of radiation and its effects.

The Three Mile Island, US

The Three Mile Island power station is near Harrisburg, Pennsylvania in the USA. On 28th March 1979, radioactivity was released into the atmosphere and contaminated coolant escaped into the nearby river. It is the most significant accident in U.S. commercial nuclear power plant history. The Three Mile Island accident caused concerns about the possibility of radiation-induced health effects, principally cancer, in the area surrounding the plant.

The studies found that the radiation released during the accident were minimal, well below any levels that have been associated with health effects from radiation exposure. The average radiation dose to people living within 10 miles of the plant was 0.08 millisieverts (mSv), with no more than 1 mSv to any single individual. The level of 0.08 mSv is about equal to a chest X-ray, and 1 mSv is about one-third of the average background level of radiation received by US citizens in a year.

In order for the lifetime risk of developing cancer to increase even slightly, doses above 100 mSv during a very short time frame would be required. A dose of 100 mSv would increase the lifetime cancer risk by approximately 0.4%, to be compared with the 38-40% of all US citizens who would develop cancer at some point during their life from all other causes.

The site and reactor were mostly contaminated. It has taken 14 years and cost $1 billion to clean up the area. Up to date, the ruins are still radioactive.

More than 70 years ago the first ever nuclear bomb was detonated at the White Sands missile testing ground. The 18-kiloton bomb was detonated in 1945, causing a 12-km high mushroom and heard 320 km away. The sand at the site turned into a green radioactive gas called Trinity.

The soil at the center of the Trinity Site is still slightly more radioactive than the surrounding soil—about 10 times greater than the region’s natural background radiation. Still, that extra radioactivity results in a very small dose: if you were to stand at the center of the site for an hour, you would get a dose of about 0.01 mSv.

The Asse mine is a former salt mine used as a deep geological repository for radioactive waste in the Asse Mountains of Wolfenbüttel, Lower Saxony, Germany. It was developed between 1906 and 1908 to a depth of 765 meters.
In 1965, the extraction of potash salt in the Asse stopped. After it was shut down, the nuclear waste was officially put there for “research purposes” until the end of the 1970s. But in reality, the mine was a repository.

The mine’s publicly owned operating company applied to officially close the facility in 2007. After media reports of radioactive saltwater leakages, the operator was accused of misinforming the supervising authorities, a claim that was later officially confirmed. In 2010 the Federal Office for Radiation Protection (BfS, Bundesamt für Strahlenschutz) began an inventory to take stock of the radioactive waste stored in the Asse mine, finding 14,800 containers with undeclared content. The number of containers with medium-level radioactive waste had to be revised upwards from 1,300 to 16,100 and the total quantity of plutonium from 6 to 28 kilograms.

Nuclear waste has been stored in the Asse storage facility for over 50 years, a salt mine meant to protect the radioactive waste for 100,000 years in Germany. 12,000 liters of water drip into the site daily, causing the drums to rust and resulting in the release of radioactivity. It is impossible to get close enough to begin a cleanup program.

In the first part, we figured out what is the Nuclear Exclusion Zone, examined the most significant accident in the U.S, visited the place where the first ever nuclear bomb was detonated and explored one of the deepest geological repositories for radioactive waste in Germany.

The Semipalatinsk Test Site, also known as “The Polygon”, was the primary testing venue for the Soviet Union’s nuclear weapons. It is located on the steppe in northeast Kazakhstan (then the Kazakh SSR), south of the valley of the Irtysh River.

An image from the first Soviet test of a thermonuclear device on 12 August 1953. It released about 25 times as much energy as the US bomb dropped at Hiroshima, Japan.
Credit: Lebedev Physics Inst. (FIAN)/Hulton Archive/Getty 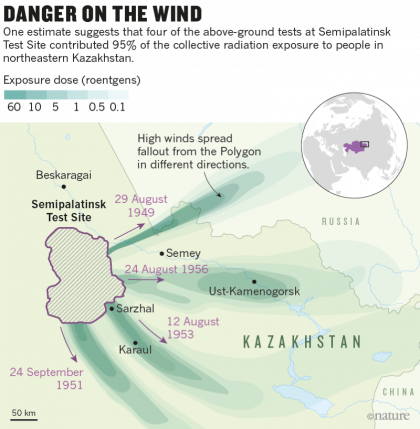 “Almost all my classmates and friends have died,” says 50-year-old farmer Aiken Akimbekov, a native of the village of Sarzhal, located near the so-called “atomic lake” formed by a powerful nuclear explosion in the mid-’60s.

How Nature Is Recovering After The Chernobyl Disaster