The April Chernobyl wildfire is currently the largest we’ve experienced to date. Thanks to a collective effort from our reporters, firefighters, and ChernobylX guides, we’ve comprised a minute by minute breakdown on what happened. Find the latest info at the top of this article, though feel free to scroll to the bottom to find out how it all started.

[Est. 20:00] A new shift of firefighters have come to extinguish the rest of the fire.

[Est. 16:00] Some firefighters have already left the Zone and are going back home.

[Est. 14:00] Fire officials in Chernobyl are celebrating a landmark moment, saying that for the first time in what has been a series of horrendous 10 days, every fire in the Exclusion Zone is now under control.

There is an occasional smoldering of grass decking, reeds and forest floor with separate flames of fire in the village Kryva Gora and the Yaniv Railway Station, between Poliske, villages Terraces and Volodymyrivka, near the villages Chistogalivka and Leliv in the territory of Korogodsky, Kotovsky, Denysovytsky, Paryshevsky and Lubyansky Forests.

No open fire is observed.

[Est. 21:00] Firefighters in Chernobyl are reporting that the active fires have been extinguished, heavily assisted by the rain, though media from the Zone show otherwise. 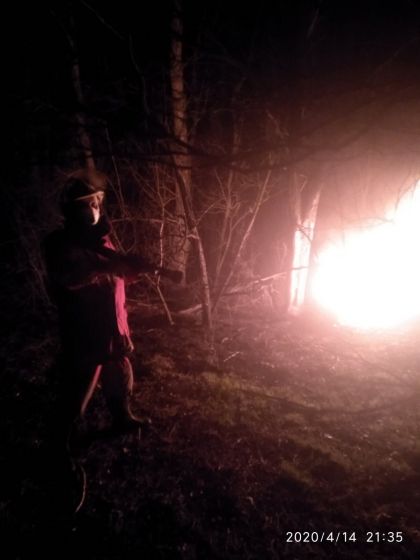 [Est. 20:00] New fires were found in the village Kryva Hora of the Parishovsky Forestry and in the area of ​​railway station Yaniv of Lubianski Forestry.

There is no open fire.

There is a slight smoldering of the forest floor with separate cells.

In total, 415 people and 98 vehicles were involved in the Exclusion Zone territory, including more than 321 people and 66 vehicles from SES, including 3 planes and 3 helicopters.

[Est. 20:00] Levels of radiation inside the building of the fire station at the ChNPP had increased because of the fires nearby. It’s 0,95 mcrSv/h. 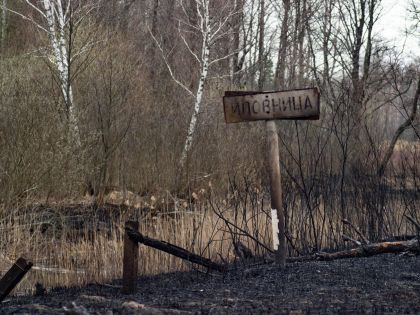 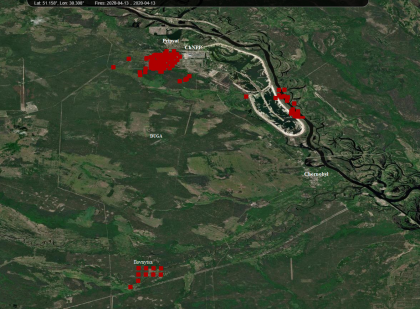 [Est. 17:00] Police in Kyiv region identified a man involved in another fire in the Chernobyl area. It was a 37-year-old local. 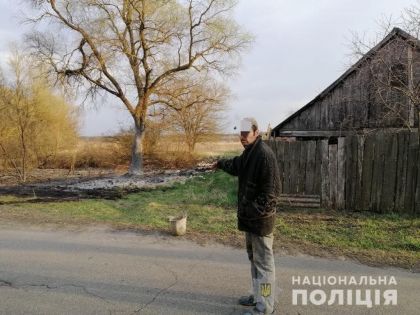 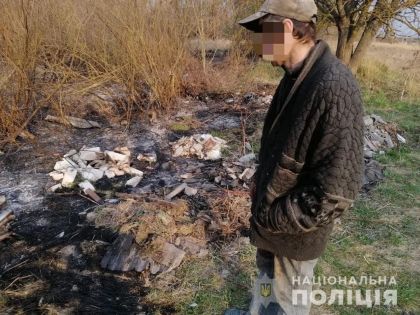 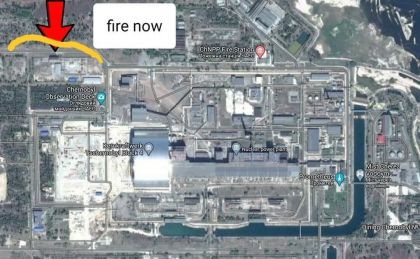 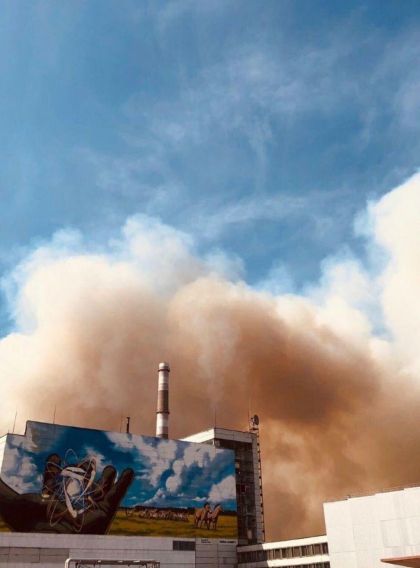 [14:00] Another fire occurred in the Chernobyl area on the left bank of the river Pripyat

[13:00] Fire has reached the borders of Pripyat and is located two kilometers directly from the Pidlisnyi radioactive waste storage facility, which houses the most highly active radiation waste of the entire Chernobyl Zone and from the Chernobyl NPP itself.

[10:00] The Red Forest and the outskirts of the former settlement and the Yanov railway station are burning. The fire came very close to Pripyat and ChNPP. Wind is in the direction of Pripyat. 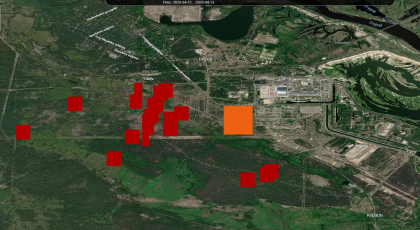 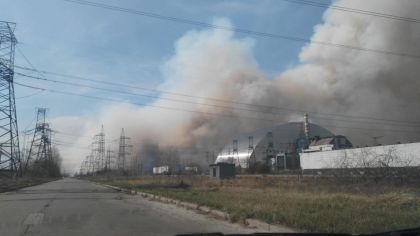 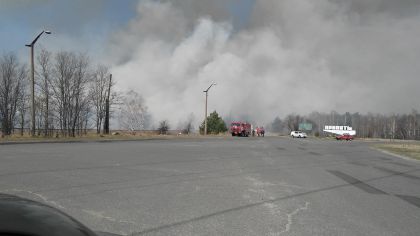 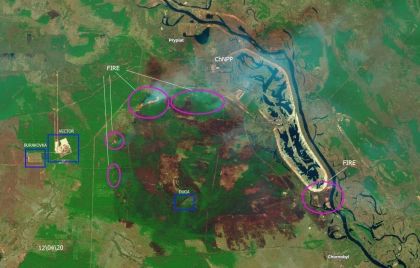 [Est. 17:00] Agriculture technic (MTS) near Kopachi have burned down, trolley bus too. [VIDEO] 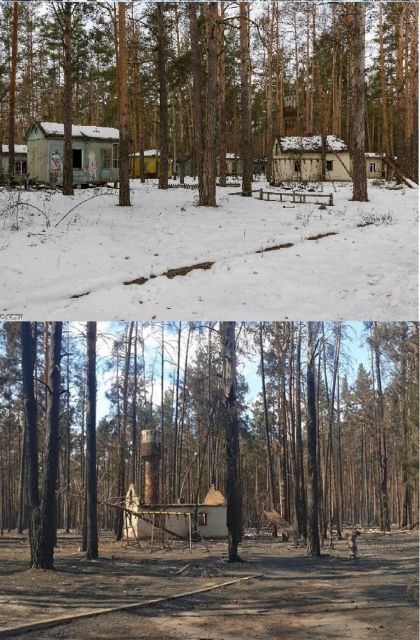 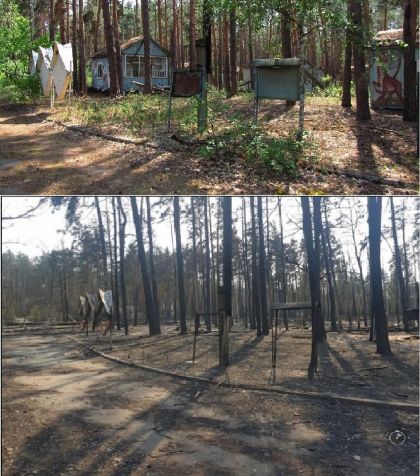 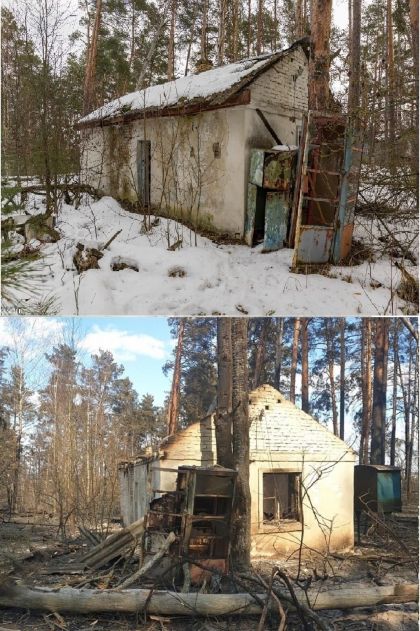 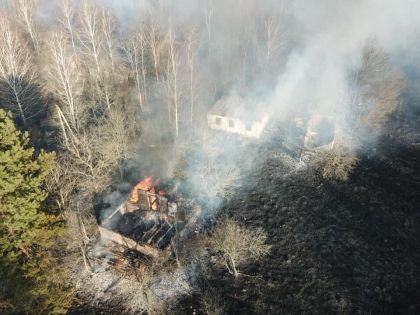 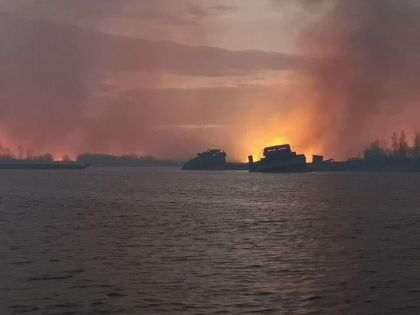 [Est. 15:00] Fires are southwest of the power plant. The forest near the old Chernobyl Nuclear Power Plant is burning, and the effects are visible from space. 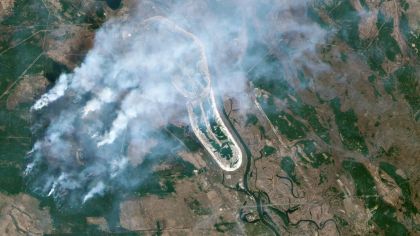 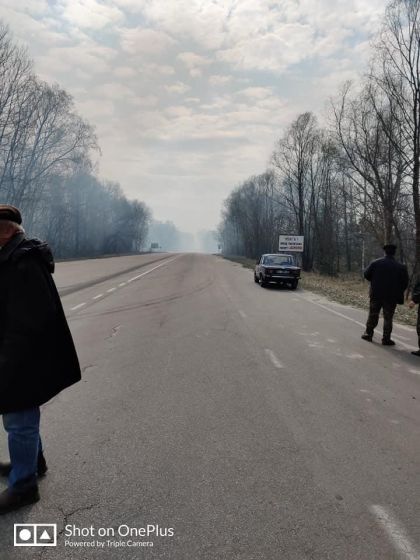 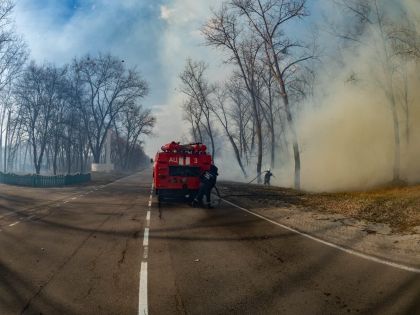 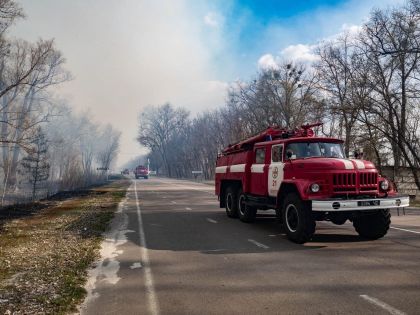 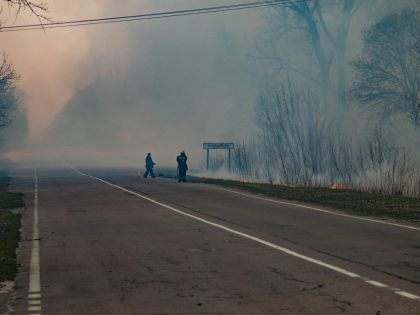 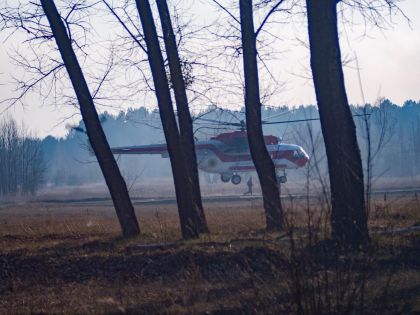 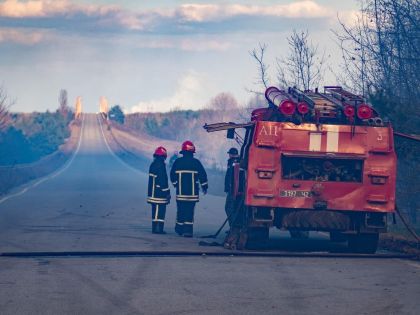 Photos: Alexander Sirota, Head of the Public Council at the State Agency of Ukraine for the Exclusion Zone Management.

[Est. 10:00] Briefing meeting SAUEZM: The fire in the exclusion zone covered about 3.5 thousand hectares and caused tens of millions of hryvnias. The origin of the fire may include:

1. The fire “came” in the exclusion zone from the Zhytomyr region from the side of the Drevlyany Reserve,

2. On the territory of the zone there are power lines, from which the spark could have arisen, which led to easy ignition of dry grass,

[09:00] SES of Ukraine: 379 people were involved in extinguishing fires along with 100 units equipment, of which 320 people and 79 units technology come from the SES (including 3 AN-32P aircraft and 2 SES helicopters, which produced 67 discharges on April 9th — 154 tons of water).

The radiation background in the city of Kyiv and the Kyiv region is within normal limits and does not exceed natural background values (Kyiv – 0.012 mR / h, Kyiv region – within 0.011 mR / h with a permissible background level of 0.05 mR / h).

[Est. 20:00] Fire has arrived at the Checkpoint Leliv. All people were evacuated from the 10 km Exclusion Zone. [VIDEO] 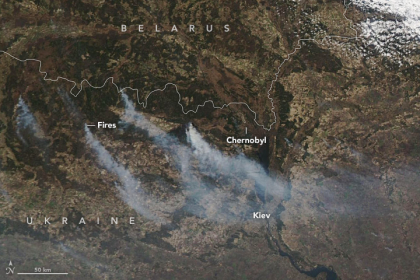 The natural-color image above shows the fires on April 9th, as observed by the Moderate Resolution Imaging Spectroradiometer (MODIS) on NASA’s Aqua satellite. NASA Visible Earth.

[15:00] Firefighters continue to fight the fire near DUGA. [VIDEO] 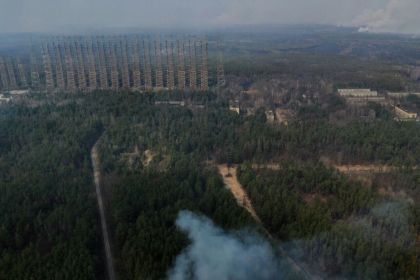 [07:00] SES of Ukraine: Observed near the village Chystogalivka in the territory of Korogodsk Forestry is smoldering of some spots in the total area of about 20 hectares. 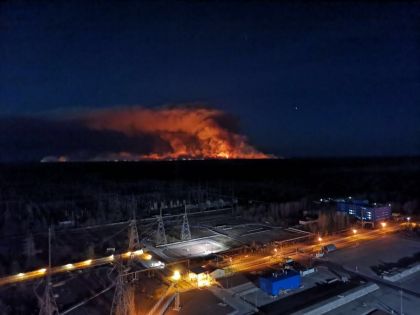 [22:00] Background radiation levels in Kyiv and the surrounding Kyiv region are within normal limits and do not exceed the natural background values.

[14:15] SES of Ukraine: Rescuers continue to fight the fire, 104 people and 26 units of equipment are involved in the extinguishing process, including one Mi-8 helicopter, which made 19 water discharges with a total volume of 38 tons.

[20:45] Fire near the village Rahivka Kotovsky Forestry, which spread over an area of about 5 hectares, is eliminated.

[Est. 14:30] SES of Ukraine: Fire being extinguished in the Kotovsky Forestry near Poliske, villages Volodymyrivka, Zhovtneve and Rudnya Ososhnya on a total area of about 20 hectares. 104 people are involved in firefighting, with 26 units of equipment, including 48 people and 9 units of technology from the SES (admits them an Mi-8 helicopter).

[10:00] Press Secretary of the State Emergencies Ministry in the Kyiv region, Victoria Ruban, states, ‘The cause of the fire in the Chernobyl zone is human activity, an investigative and operational group will work at the scene of the incident’. 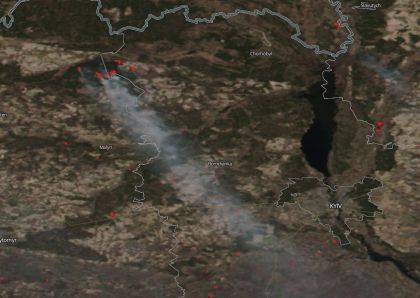 A wildfire burning in the Chernobyl Exclusion Zone, as imaged on April 5, 2020, by the NOAA-NASA Suomi NPP satellite.

[Est. 19:00] Police report the detention of a suspect, a 27-year-old resident of the village Ragivka. He (in his own words) for fun set fire to grass and garbage in three places, after which the wind threw the fire further, and it was no longer possible to extinguish the flame.

[Est. 12:00] The Head of the State Ecological Inspectorate, Egor Firsov, declares ‘a total of 100 hectares is on fire’. [Source]

[20:00] An area of 20 hectares ignites. 90 firefighters and 18 pieces of equipment, including aviation, are involved in extinguishing the fire. 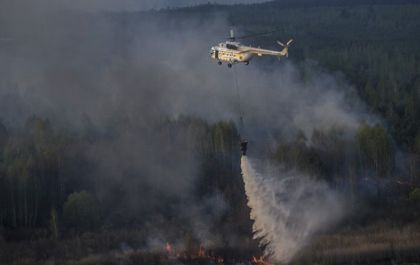 [13:22] Rescuers receive information that near the Exclusion Zone in the village of Vladimirovka Kotovsky Forestry, a wild forest fire develops.

It’s not uncommon to see fires in the zone — just not in this magnitude. April 4, 2020 will be remembered as the beginning of several days of monstrous fires. More than 500 firefighters worked to slow the spread and shore up containment lines. At last comes the 15th of April, where fire officials in Chernobyl celebrate a landmark moment, saying that for the first time in what has been a series of horrendous days, every fire in the Exclusion Zone is under control.

Here’s the minute by minute recap of the situation.