Pripyat was once a model city of the Soviet government and was established in 1970 (4th February) for the workers of the nuclear power plant and their families. The average age of the city’s inhabitants was, at the time of the accident only 25 years old. Pripyat had all the luxuries of a modern city – a railway station, port, hospital and even a fairground.

The city had everything, until the day of the accident, which was on 26th April 1986. As you (probably already) know, the day the accident happened, the state officials still had not warned the 50,000 inhabitants about the threat of radioactive pollution; neither had they provided them with iodine pills which would have helped against the effects of the radiation. The power plant accident caused the level of radiation to exceed natural levels by up to a thousand times. 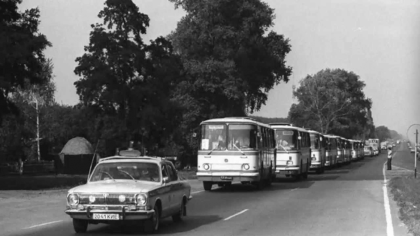 The evacuation of Pripyat took place the day after the accident – on the afternoon of April 27, 1986 by train, boat and most of all by buses. The inhabitants were allowed to take only necessary items with them, as they were expecting to return in three days. This information was released to avoid panic and to stop people taking too much luggage with them. Later, the authorities decided that the city must remain empty forever.

The announcement to the residents of Pripyat was as follows:

For the attention of the residents of Pripyat! The City Council informs you that due to the accident at Chernobyl Power Station in the city of Pripyat the radioactive conditions in the vicinity are deteriorating. The Communist Party, its officials and the armed forces are taking necessary steps to combat this. Nevertheless, with the view to keep people as safe and healthy as possible, the children being top priority, we need to temporarily evacuate the citizens in the nearest towns of Kyiv region. For these reasons, starting from April 27 (1986) 2PM, each apartment block will be able to have a bus at its disposal, supervised by the police and the city officials.

It is highly advisable to take your documents, some vital personal belongings and a certain amount of food, just in case, with you. The senior executives of public and industrial facilities of the city has decided on the list of employees needed to stay in Pripyat to maintain these facilities in a good working order. All the houses will be guarded by the police during the evacuation period. Comrades, leaving your residences temporarily, please make sure you have turned off the lights, electrical equipment and water and shut the windows. Please keep calm and orderly in the process of this short-term evacuation.

During the evacuation, women and children were collected first, but there was a serious lack of buses in this part of Soviet Union. The buses thus had to come from other parts of the country to evacuate all the 50 thousand inhabitants of Pripyat. The queue for the buses was 20 kilometres long – which means that when the first bus was leaving Pripyat, the last bus couldn’t even see the power plant chimneys from the distance away. In less than three hours the city was empty.

After Pripyat was evacuated, the evacuation of other villages within a distance of 30 kilometres from the reactor was conducted, until the beginning of May. Decontamination work was carried out in 1 840 settlements. However, the Chernobyl exclusion zone wasn’t formed until 1994 when the inhabitants of the last villages in the western part of it were moved to new apartments in Kyiv and Zhytomir regions. 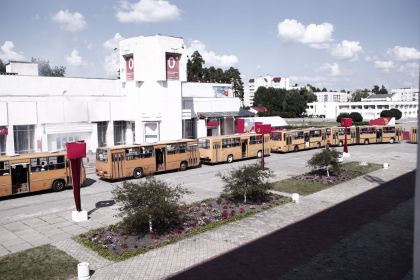 During the evacuation, the people of Pripyat were not allowed to take their pets or cattle with them; due to the fact that these animals could have had their furs contaminated with radioactive dust. Also, to avoid further contamination of the environment special forces had to liquidate every animal in the Chernobyl zone. On May 5th, the evacuation of people living in the exclusion zone (30 km radius around Chernobyl) was finished. Today, people are forbidden to enter the zone, with the exception of ex-residents visiting cemeteries or those with a permit, such as tourists and workers.

Around 100 people (mostly pensioners) still live in this exclusion zone and all are living here at their own risk. You can visit them during your 2-day Chernobyl Tour and see how they are living and ask them why they returned. Apart from these inhabitants, there are also around 3 000 workers whom are in a special regime and take care of the Chernobyl zone itself. There are around 2 500 workers still working at the Chernobyl power plant, even though it has been completely shutdown since year 2000. Besides liquidating the nuclear fuel, these workers also ensure radiation safety and electricity flow from Belarus to Ukraine and vice versa. A couple of thousand workers also continued with the construction of the new sarcophagus, which was completed in 2018. More about the new safe confinement on our blog. 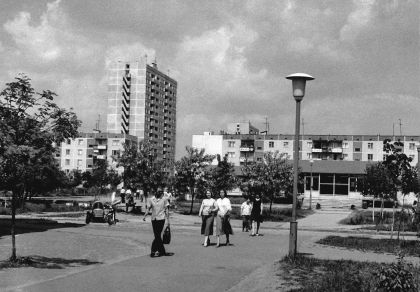 Pripyat is now a city of ghosts and despite no-one living there, has it’s own grace and atmosphere. Pripyat did not meet its end like some nearby villages, which were buried underground by bulldozers. Boards on the road with their names and a village map commemorate the abandoned villages.

The Police and Army guard Pripyat, as well as the whole 30-kilometer restricted zone. Despite non-stop duty, it did not prevent robbery and plunder, mostly in 1991 after the Soviet Union dissolution when the Chernobyl zone was less secure. The whole city of Pripyat has been plundered and there isn’t a single flat that has not been visited by thieves, taking away all precious items to be found. The residents had a chance in 1987 to go back to get some of their belongings, again just a few bags, but only a small percentage did. A military factory (named Jupiter) had been operating in the city until 1997; the famous swimming pool was operating until 1998, however today it is even more plundered and destroyed than the majority of flats or schools in the city. There are still three parts of the city that are still in operation: the laundry (for Chernobyl nuclear power plant), truck garages and a deep-ground well with pumping station (supply of water for power plant).