Radiation Diary I: From Atoms to Radiation

Of course not! To understand the current situation in Chernobyl, it is necessary to understand what radioactivity is, radiation, and how it affects us. Unfortunately, these issues are often misunderstood, what leads to many myths about radiation and Chernobyl. For example, I remember my primary school teacher telling us scary stories about enormous mutant animals and plants in Chernobyl that even the creators of Fallout games would not be ashamed of. While certainly entertaining (at least in retrospective), I think that this kind of ‘information’ does more harm than good.

So, let me give you more accurate information. I will try to explain the basic facts about radiation and show why the most common misunderstandings and myths are wrong. My task is not to belittle the dangers of radiation, but rather help you understand it a little bit. I believe that this will help you to build a healthy respect for radiation, as well as to understand the current situation in Chernobyl and the rules that must be obeyed during your visit. 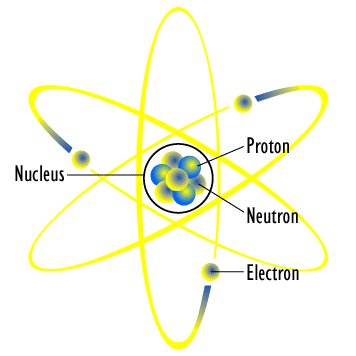 Let me start with the very basic fact that all the objects around us are composed of atoms. Each atom consists of electrons and a nucleus containing protons and neutrons interacting with each other in a very complicated way. All the atoms of a given chemical element have the same number of protons in their nuclei. However, each chemical element can come in many variants called isotopes, which differ by the number of neutrons. For example, each atom of iron has 26 protons in the nucleus, but there are 28 isotopes of iron. The most common of them is the so-called iron-56, where the number 56 is the total number of protons and neutrons combined.

The basic principle is that a radioactive nucleus decays as much as it can, i.e. until just the stable end product of the decay is left. The speed with which some radioactive nucleus decays is characterised by the so-called half-life, that is, the time in which half of the atoms in a given sample decay. The half-life of radioactive materials varies from tiny fractions of a second to billions of years. Isotopes with the short half-life decay faster and hence are ‘more radioactive’, while the long-lived isotopes are ‘less radioactive’. For example, one isotope of uranium called uranium-238 has a half-life of 4.5 billion years, which is comparable with the age of the Earth. This means that there is roughly 50% of uranium-238 that existed during the formation of the Earth 4.5 billion years ago. Interestingly, it was exactly this fact that allowed us to measure the age of the Earth. As you can see, radioactivity can be quite useful.

Where does radioactivity come from?

A common misunderstanding is that radioactivity is something artificial and caused by people, but actually there are many natural sources of radioactivity. The long-lived isotopes (mentioned earlier – uranium-238) have been here since the Earth was formed, just like all other elements. On the other hand, the short-lived isotopes are mostly present because they are constantly being produced by natural processes. For example, this is the case of radon-222, which is the most important source of natural radiation that we are exposed to. This isotope of radon decays very quickly with a half-life of just 3 days, but it is quite abundant as it is constantly produced in the radioactive decay of uranium.

Another natural source of some radioactive materials are the cosmic rays reaching the Earth. An example is carbon-14, which is produced by the interaction of cosmic rays with the atmospheric nitrogen and plays a crucial role in the carbon dating used in archaeology. 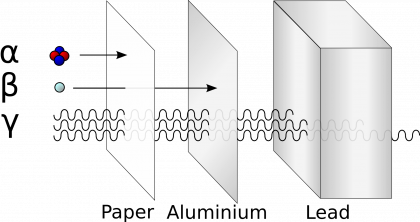 The amount of energy that is released during radioactive decay is enormous. Typically, these energies are a million times larger than what is encountered in normal chemical processes such as combustion. Because of this we are able to obtain the same amount of energy fr­om one kilogram of uranium as we are from several thousand tons of coal. Of course, this makes nuclear power not only a very effective source of energy, but a dangerous one as well.

Affects on your health

A common misunderstanding is that the total amount of energy transferred by radiation is so enormous that it ‘burns’ you directly. While in some extreme situations, like the blast of a nuclear bomb or by entering the active core of a nuclear reactor, this may be true, the fact is that radiation is dangerous at much lower doses than this. To understand why, we have to understand how radiation interacts with objects around us. While there are many types of radiation, their effect at the end is remarkably similar: absorption of high-energetic radiation by atoms causes them to lose electrons and become what we call ions. All radiation, and this includes all radiation from nuclear processes, that have enough energy to cause this is called ionizing radiation.

If the atoms in molecules gets ionized, the chemical bonds holding the molecultogether gets disrupted. If these molecules are inside the cells of our body, this will probably damage these cells. The most likely outcome is that the affected cells die and get replaced by healthy ones. However, the worst situation would be if the cell survives and gets damaged ‘just’ a little bit; especially if this happens to the molecules of DNA. These are very delicate molecules playing the role of ‘central computers’ carrying all the information about the cell, and controls what information will be passed to the next generation of the cells during their reproduction. So, if the molecules of DNA get damaged, the information which they carry can be changed slightly and passed to the next generation. In some unfortunate cases, these new cells may start to divide uncontrollably and ‘overpower’ the healthy cells, which results in cancer.

It is interesting that most of this damage is not done by the molecules of DNA being ‘hit’ by radiation directly, but comes from the indirect “hits” of water in the cells. This is because radiation is not choosing what to damage; it just passes through objects and ‘blindly’ interacts with whatever is around. As you surely know, our bodies are mostly made of water, so radiation is very likely to interact with it. If it does, the molecule of water splits and can then form the infamous free radicals, or other toxic substances that can harm the cells.

This is of course a very complicated subject, but as you can see, the basic principle is quite simple. The most important message here is that the way radiation causes damage is not really a mystery. Most importantly, it is not a mystery to our bodies, which have certain mechanisms to fight it and repair itself from a certain amount of damage caused by radiation. Of course, the important phrase here is the ‘certain amount’. In order to understand it better, we should talk about how to measure the amount of radiation.

This is exactly the topic of the following entry of this radiation diary. I will start with some basics about how radiation is measured, what the safe doses of radiation are, and other interesting stuff. Finally, I will get to what you probably care about the most —what is the actual situation in Chernobyl and how safe is it to visit?

…a little hint: it is quite safe if you use your common sense (and follow your guides)!

How safe is to travel to Ukraine in these days?