There’s nothing quite like holiday food! It truly brings people together. From holiday ham to homemade cookies, holiday food grows connection and often our waistlines too.

In Soviet times the New Year was a main winter holiday with its own traditions and festive food. Each housewife had her special “New Year’s menu, which she carefully prepared for the whole family. During our Christmas charity tour,  we, ChernobylX, asked Chernobyl babushkas about their favourite dishes which they served for the New Year’s table.

However, people were used to the annual winter feasts – they needed joy and a rest from the hard work and dark cold days – so the Communist Party decided to arrange a fir-tree party for peasants and proletarians on New Year’s Eve. The first official one in 1935 was celebrated in the Moscow Council of Trade Unions.

“New Year was very important for me, because all my family gathered at the same table, discussing how the old year passed and cherishing the new one”, – says Chernobyl self-settler babushka Marusya, –nowadays my village is part of the Chernobyl Exclusion Zone and here are not so much people – only 10 people including me. All my family lives outside of the Zone, except my cousin Hanna, who is my neighbor.” 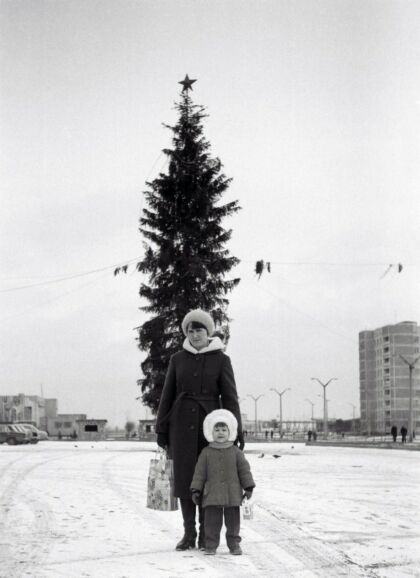 The New Year has become a familiar and traditional family holiday for Soviet people, as well as for Pripyat residents and people from villages, which are today in the Chernobyl Exclusion Zone) – it has been celebrated in a rather monotonous manner: with an elegant Yolka (Christmas tree), a festive table and the speech by speech from the head of state on television.

“Compared with my relatives, our family had a good TV, so many of my family members came to us to watch the New Year speech by the General Secretary of the Soviet Union”, – remembers Chernobyl babushka Masha.

In our blog “New Year Celebration In Pripyat” we explained more in details about New Year’s celebration and traditions in Soviet times with the example of the city of Pripyat. 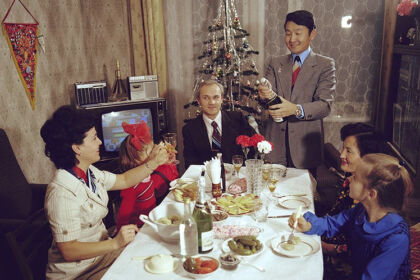 The New Year’s table was one of the most festive parts in Soviet houses, because of the popular belief that it should be with the best dishes, bursting with food – in this case, the abundance in the house will remain for the whole year. That’s why people used the best crystal, porcelain, and ceramic dishes (festive ones, which we used only for special occasions) for New Year’s table. 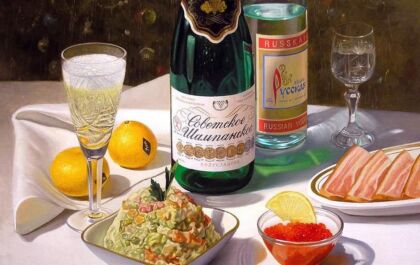 Main dishes on the festive table during Soviet times: Olivier salad, red caviar, boiled pork (can be any other salami or ham), tangerines, Soviet Champagne and Russian Vodka.

There were also boiled beetroot and carrot salads with garlic and mayonnaise. An invariable attribute were sandwiches with sprats and red caviar, sliced sausage and cheese, assorted pickles prepared for the winter. In those days, fresh vegetables were impossible to buy. 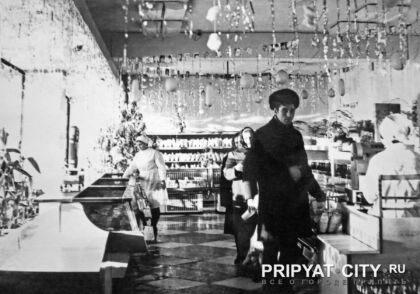 Historians have calculated that in the 70-80s the cost of the New Year’s table fluctuated around 100-150 rubles – it was considered as a good salary. That is why large companies gathered more often – the celebration was not so noticeably expensive. 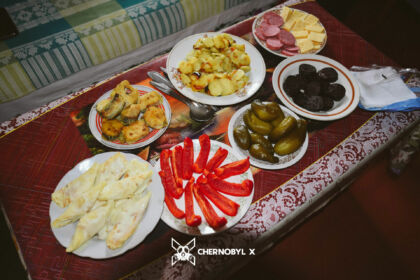 Despite her age, babushka Masha from Kupuvate village still loves to cook her favorite dishes for everyone who visits her.
Photo: ChernobylX

Not a single feast of that time was complete without these festive dishes. Chernobyl babushkas shared with us their favourite dishes, which were served on their New Year’s table. 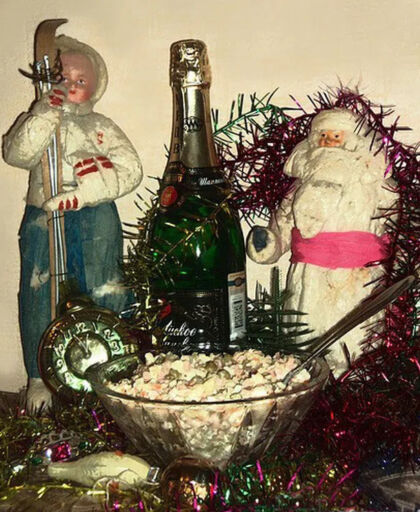 In Soviet times, the popular Olivier salad was simply called Winter Salad. And it is also prepared from a simple set of products. The most exotic ingredient then was canned green peas. 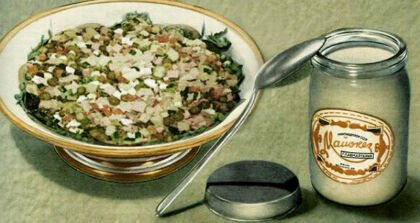 Olivier salad, not yet served with mayo. From the illustrations of the 1950s.

“My favourite dish was Oliver salad”, – says babushka Hanna, – “I couldn’t cook it every year, because it was hard to buy all the ingredients, like sausage or canned peas. Sometimes I replaced missing ingredients – for sausage I used meat, for peas – boiled red beet”.

Fact: In the 70s, the massive deficit reached its climax and then only grew. It was hard to buy such products as milk, sausage, butter, fruits, candies etc.

Herring In “Shuba-Coat” from babushka Marusya

Herring In “Shuba-Coat” was one of the obligatory dishes  on the Soviet New Year’s table.

Another incredible salad, which name confuses foreigners – herring in “shuba-coat”. A layered salad of herring, beets, potatoes, eggs, carrots and sometimes apples. Of course, everything is generously greased with mayo.

“My favourite, but rare dish on my table was herring in “shuba-coat”. It was quite hard to find herring in shops, especially in the village, but my good friend, who worked in a small shop, sometimes left for me herring. Next “hard to buy” product was mayo, but I learnt how to make home mayo easily, so it wasn’t a problem for me”, – says self-settler babushka Marusya.

Step by step cooking:
Peel the vegetables, grate. Do the same with the eggs. Finely chop the herring fillet. Peel the onion and chop finely.
Layer in a salad bowl: grated potatoes, onions, mayonnaise, herring, again some potatoes and onions. Then mayonnaise, eggs, carrots. Mayonnaise, beets. Grease the beets with mayonnaise. Decorate the salad as desired. 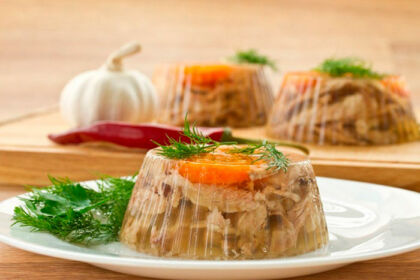 Kholodets or meat jelly is a thick jelly-like dish from meat broth with garlic and spices. It is traditionally served at winter festivities.

“Kholodets is a dish that I serve for every New Year in my life, even nowadays I can’t imagine my festive table without it. I don’t care that it takes too much time to cook – it’s my must-have. The secret of perfect Kholodets is vegetables – carrot, onion – to make meat jelly”,  – shares her srecipe with us babushka Masha.

Meat with bones containing gelatinous substance that lets it congeal is often used for cooking meat jelly. Sometimes it is made from fish, too. Meat jelly may be served as a main course or as a cold snack.

Step by step cooking:
Rinse the meat. Put it in the pot and pour 4 liters of cold water. Bring it to the boil, and then cook over low heat for 6 hrs.

When ready, pull meat out of the stock; put vegetables aside – you don’t need them anymore.

Pull all meat out of bones. Put it into the serving bowls.

Pour the meat broth left after cooking into the serving bowls. Sieve the stock before putting it in the bowls. Put the cooled dish in the refrigerator for 2 hrs or more.

“To give a special transparency to the broth, I put a piece of crystal (a crystal cork from a decanter) into the pan during cooking. Slices of lean meat and parsley leaves looked very beautiful in a transparent broth of jellied meat. In the prepared Kholodets, I add slices of beautifully chopped boiled carrots, a boiled egg and leaves of greens”, – explains Masha, – “ my perfect Kholodets is ready”.

For many in the Soviet Union, New Year’s Eve remained a family holiday. Nowadays, it still remains for many people as the main winter holiday when family gathers at the same table, people discussing how the old year passed and cherishing the new one and, of course, eating traditional family dishes such as Olivier salad, red caviar, Kholodets.

We wish you such a warm, happy and healthy New Year! And of course looking forward to an extremely interesting adventures in the Chernobyl Zone with you!

PRIPYAT: THE NINTH „ATOMGRAD“ NEXT TO THE CHERNOBYL NUCLEAR DISASTER