Chernobyl Charity during the War

Home, family, friends, human connection, safety, and good vibes belong to the most important things in the world. This year clearly showed us how much we’re ready to protect it.  Chernobyl is our home, where we have a huge family, a lot of friends, colleagues, and places which reminds us about the amazing times we spent together with you, our dear Chernobyl lovers.

Charity starts at home. If you have known us for a while, throughout the years we have created such a tradition to organize charity tours on our own and with you, our dear explorers.

Before the war, from each tour, Chernobyl X dedicated 1% to support the Chornobyl self-settlers. We bought food, medicine, and helped them pay for the electricity, gas and water, basically supporting them to make ends meet.

February 24 became one of the hardest days for us, but also one that showed us that we are not alone.

We have been receiving HUNDREDS of supporting messages, offers to help, offers to accommodate our colleagues, financial donations, and above all YOUR LOVING SUPPORT. None of us expected this movement, this connection, and we are eternally thankful to you.

This year we faced a true “Charity challenge”, but with your endless support we were able to bring Chernobyl babushkas products, groceries, fresh water, and other help as they were completely cut off for over a month. In the meantime, we were also able to send regular food supplies to the power plant workers until a regular supply chain was relaunched.

24.02.2022, 06:26 Abandoned checkpoint “Dytyatky”. The last photo before the capture of the Chernobyl Zone by Russian soldiers.
Photo: Oleksandr Syrota

The Chernobyl Exclusion Zone, especially the borders between Ukraine and Belarus were in the spotlight from the middle of February, when satellite images found a pontoon bridge crossing the river Pripyat in Belarus, just a few kilometers away from the Pripyat ghost town. The Chernobyl Zone was closed to keep the tourists safe in case of an invasion on Friday 18th February.

Just six days later, on February 24, 2022, at about 5pm, all facilities of the Chernobyl NPP located in the Exclusion Zone: the nuclear fuel storage facilities, the New Safe Confinement for Shelter; Units 1, 2, 3 of the Chernobyl NPP at the stage of decommissioning – were taken under the control of the Russian invaders. The servicemen of the Ukrainian military unit guarding the Chernobyl NPP were disarmed.

On 20th March, Chernobyl NPP employees were partly rotated, and some people who were there for about 600 hours – were finally able to go home. 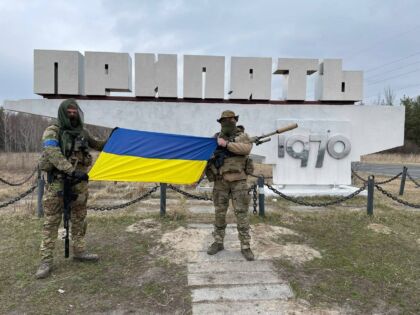 The Ukrainian militaries holding the Ukrainian flag in front of the Pripyat sign, April, 2022.
Photo: Unknown

April 3, the day when Ukrainian militaries took control of the city of Pripyat and the area of the Ukrainian border with Belarus. 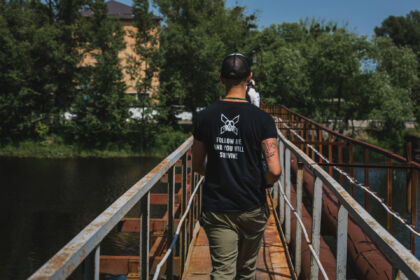 Chernobyl changed a lot in the month under occupation. We all saw the horrible photos and videos with destroyed buildings, plundered shops, and smashed cars right in the city center of Chernobyl.

But the most shocking thing for us was a message from our friends and colleagues from the Zone – “Could you help us and bring some food for us? At least cheap fast food noodles, and bread. People didn’t see/eat bread during the occupation.” 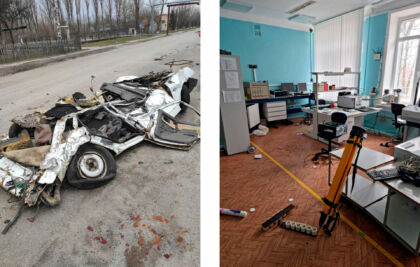 They didn’t have enough food. People with whom we knew, worked together, helped the Zone for over 10 years didn’t have food…We were speechless.

It is from this point we understood that we needed to act. We needed to do everything we could. At that time it was almost impossible to bring some supplies to the Chernobyl Zone, as all bridges and roads were destroyed or mined. We faced a real challenge here. But it didn’t stop us. 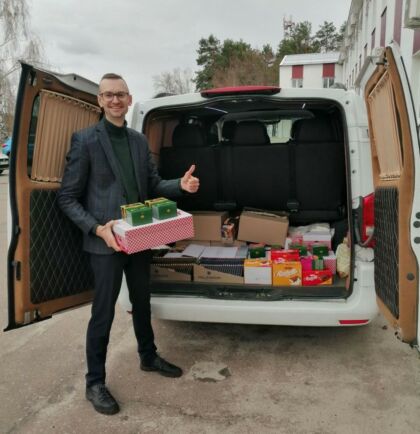 In the photo Bohdan Serdyuk, head of the Chernobyl NPP worker’s Union with the humanitarian help for facility workers.
Photo: ChernobylX

We contacted many people from the Zone asking how we can deliver at least food for them. We got in contact with Bohdan Serdyuk, who is the head of the Chernobyl NPP worker’s Union and he helped us manage the delivery of the humanitarian aid.

Special thanks to Bohdan for helping us manage and deliver all the help, without him we wouldn’t be able to do it.

Also huge thanks to all of YOU! With the HUNDREDS of supporting messages, financial donations, offers to help and above all YOUR ENDLESS SUPPORT.

We are so proud of you who have become our family and have contributed extra help during these dark times for Chernobyl babushkas and the Exclusion Zone workers.

Humanitarian Help for the Chernobyl Workers 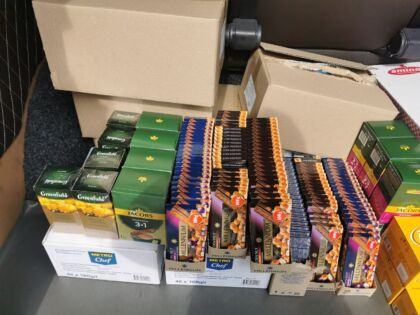 On April 12, we were able to deliver the first humanitarian aid for 120 personnel of Chernobyl NPP to the Chernobyl center in Slavutych, as it wasn’t possible to bring it directly to the Zone (bridges and roads were destroyed, many places were mined by the Russians).

This supply was prepared as individual sets with tea, coffee, sugar, instant vermicelli, canned tuna, chocolate bars with whole nuts, waffles, cookies – all of which we could find in the shops in Kyiv and what could help them survive until the next delivery. 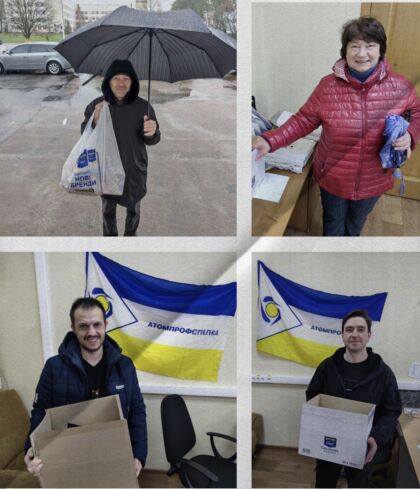 Our amazing guides from the Chernobyl NPP with whom many of you explored the facility.
Photo: ChernobylX

The second delivery of humanitarian aid was held on 21st April to the starving workers of the Chernobyl Nuclear Power Plant and the Chernobyl dogs all before the Holy Easter, which Ukrainians had celebrated this year on April 24th. 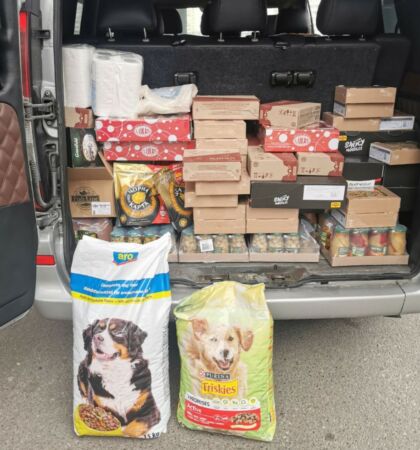 The second delivery of humanitarian aid to the Chernobyl Zone.
Photo: ChernobylX

Thanks to you and especially our friend Jonathan, we could buy more this time. We also prepared packages for the dear guides of the Chernobyl power plant – Stanislav, Julia, and many others who are looking forward to starting work again, as well as we do.

It has been 36 years since the world’s worst nuclear disaster, when a “peaceful atom” destroyed the 4th reactor of the Chernobyl NPP. The Chernobyl catastrophe changed the world. 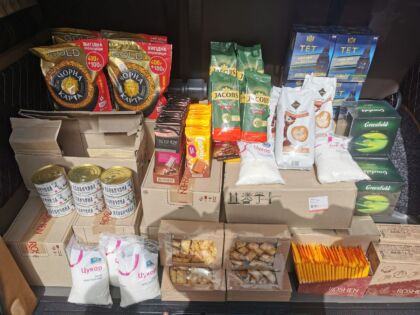 The third delivery of humanitarian aid to the Chernobyl Zone.
Photo: ChernobylX

That’s why it was important for us to deliver another help to the Zone on the 26th April for the nuclear power plant workers, the successors of the Chernobyl nuclear disaster, people who are our guardians defending the whole world from another catastrophe. 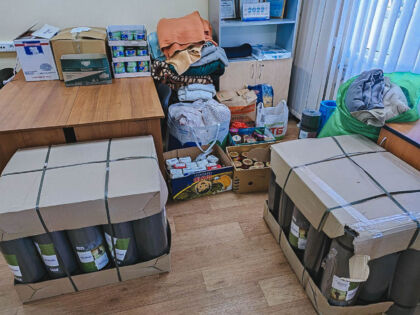 Our next challenge was – how to make a more comfortable condition for Chernobyl NPP workers, as they worked and slept at the facility without having beds or proper conditions for rest. Thanks to your donations we were able to buy 40 yoga mats for sleeping. 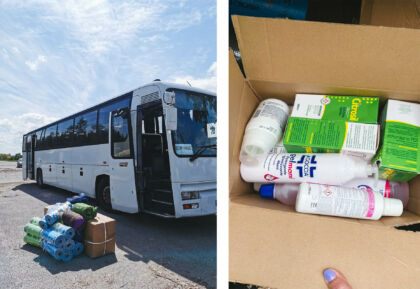 We weren’t alone in trying to help people in Chernobyl – together with a couple of the humanitarian centers in Kyiv and Ivano-Frankivsk we not only found another 40 yoga mats for the NPP workers, but also helped other Chernobyl workers bringing food and medicines. 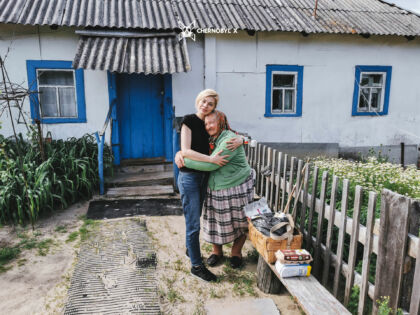 Visiting the Chernobyl babushkas, helping them around the house and in their gardens, helping them to pay for the electricity, gas, and water, bringing them food supplies, warm clothes, and even medicaments – has always been and always will be the main priority for us!

Before the war, around 100 Chernobyl babushkas that were still living in the Chernobyl Zone were safe and sound. However, in the last couple of years they felt more alone than ever before, as they missed our visits with you, the tourists, the explorers of Chernobyl.

Many of you, our dear travelers, visited babushkas with us during a past tour or even our organized charity tours. Nowadays, it has become harder to visit them because of the war, but we will continue our tradition no matter what.

Our primary goal is still the same, as it has been for years. We go to help the people who have chosen to live in their motherland after the biggest nuclear disaster of the 20th century and who have been cut off from their country and its social life. 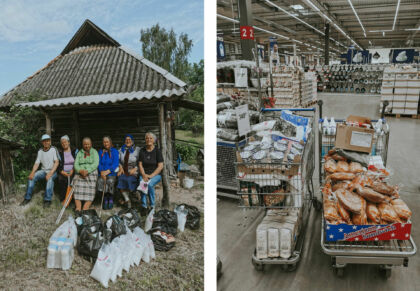 This time, our charity visit was in Kupuvate village, where we met around 10 self-settlers (unfortunately we were not allowed to visit all places), but still we were super happy to finally see our dear babushkas, give them a warm hug, and talk with them about their experiences.

We learnt that some self-settlers left the Zone and went to stay with their relatives in safe places. We have kept in touch with them constantly. 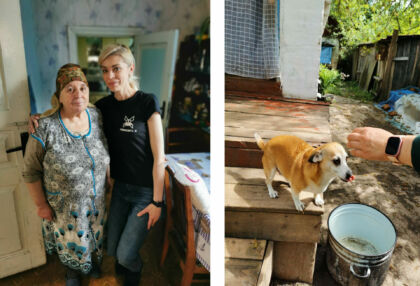 Thanks to your donations we were able to bring all the needed products for the babushkas and of course, we didn’t forget about their lovely pets! We even met one of the most famous dogs in Chernobyl – the dancing dog, Dana (many of you remember Dana and Valentyna Borisovna while visiting Chernobyl during the tour).

For those of you who are ready to support Chernobyl babushkas to get to a safe place from the Russian military, please send a good vibe of energy, sincere pray, and if you feel like sending energy in monetary form, every penny will be appreciated (and given to the ones in need) – use this PayPal donation button.

Charity Expedition – What’s this and What’s next? 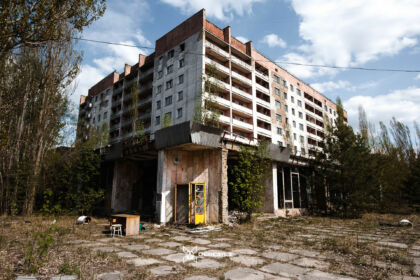 Besides all the goods we have been supplying in the previous months to the people in the Chernobyl Zone (all thanks to your support), we now have a way of bringing foreigners with us too.

As humanitarian helpers we are going to visit all the people who have stayed in the Zone, those who have helped the Zone recover after the Russian invasion. We will be using ONLY safe, proven, and predetermined routes. We will have a police escort with us all the time.

This is not your usual touristic tour, it is more of a humanitarian mission, so please only those who have a deep sense of helping apply here.

If you are a selfie-hunter, please wait until the Exclusion Zone will be officially opened for tourists. 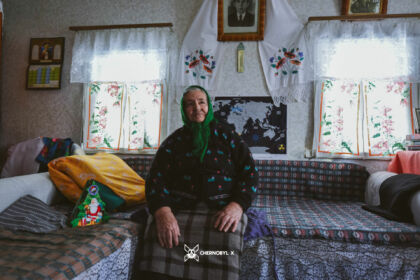 This Charity tour is fully not-for-profit as all proceeds are used for buying products, medicaments, and material supplies for people in need in the Chernobyl Zone.

Read more about our charity tours: